The Curlew Forum Newsletter aims to connect and inform the various groups working on Curlews throughout lowland and southern Britain. Our website www.curlewcall.org has previous issues as well as useful information and literature.

(agreed at the 2018 meeting of the Curlew Forum)

“Our goal is to work with farmers and land managers to reverse the current decline, and continue monitoring the status, of breeding Curlew across lowland and southern Britain. We will do this by sharing knowledge and experience, raising awareness, offering advice, and securing funding to implement effective conservation measures”.

Meetings of the Curlew Forum were held at Slimbridge in autumn 2017 and 2018 and, with the meeting on 28 November 2019, they have become an annual event. This year the meeting was on a larger scale, with 45 participants and 29 apologies, so a larger room had to be found, and the meeting was held in the Garden Room, the newly refurbished meeting centre in Sir Peters Scott’s old house at the headquarters of the Wildfowl and Wetlands Trust at Slimbridge, with Mary Colwell in the Chair.

It is planned to post a fuller account of the meeting on the Curlewcall website in due course, where possible with the texts of presentations. For the moment, this Newsletter offers a summary.

The meeting heard about several techniques for studying Curlews at the nest site:

Hyper-incubation: Russ Wynn and the New Forest team have for several years been using nest loggers (small thermometers pressed into the earth below a nest) to measure the temperature in Curlew nests, and thus to tell whether a nest is being incubated, and the precise time when a nest is predated. Russ spoke of a new behaviour which he baptised ‘hyper-incubation’. During a heavy thunderstorm lasting for more than an hour on 21 May 2018 over a part of the New Forest, the readings on several loggers shot up by two to four degrees Centigrade; this is interpreted as a reaction by the sitting bird, to protect the nest from damage by the heavy rain; the incubating adult sits even tighter, thus causing the temperature to rise sharply.

Geoff Hilton presented an overview of the theory behind head-starting, then a review of head-starting projects in 2019.

The journal “British Birds” has a Trust Fund which makes grants for fieldwork. Curlew workers may wish to apply for financial support for their projects from this fund.

Follow-up to The Downing Street Curlew summit in July 2019

Details of the Summit were given in Newsletter 7. It came about because Teresa May’s Environment Advisor, after reading Mary Colwell’s book, offered to organise a meeting on Curlews at Downing Street. The participants included Curlew Champions from the Welsh, Scottish and Westminster parliaments, ministries and national agencies, and several from Curlew Forum. The resulting Downing Street Summit document (published on the Curlewcall website) summarised current activities, highlighting the importance of advocacy and Citizen Science, alongside agri-environment schemes and predator control, and of ensuring these items were included in new Environmental Land Management measures (ELMs). The Curlew Forum discussed follow-up to the July summit.

Future of the Curlew Forum

From the Chair, Mary Colwell said the Steering Committee was keen to have the views of Forum members on the future of the Curlew Forum: where it was going, and how participants would like to see it contributing to Curlew conservation. She recalled that the Forum had come came into existence in 2017; it has no Constitution or Terms of Reference, though it does have a mission statement (on the website). The Steering Committee is informal and largely self-appointed. The Forum seems to have been successful: participants seem to think there is value in the exchange of ideas, information and lessons learned, but she asked for comments from the floor, pointing out that the Downing Street summit had called for a national secretariat for Curlew conservation.

Summing up the discussions, Mary Colwell said the Forum had a mandate to carry on as before, with some support from a small secretariat. She also noted that a new charity, Curlew Action, was being established, with the principal purpose of raising funds for Curlew projects.

Decrease in wintering Curlews on the south coast

At the Curlew Forum meeting in Slimbridge, Peter Potts drew attention (in addition to his comments on breeding Curlews in the New Forest which often fly the short distance to the coast on The Solent during the breeding season) to decreases in numbers of wintering birds on The Solent, and in other wintering areas along the south coast of England. He pointed out that wintering Curlews feed not only on coastal mudflats, but on grass fields inland. He drew attention to the loss of such habitats in the area of Southampton and Portsmouth, many of which were being developed for house building, with a lack of mitigation measures to provide alternative feeding areas (always supposing that Curlews – birds of fixed habit – would use ‘alternative’ areas). See his paper in the Hampshire Ornithological Society Annual Report 2018 on Movements of GPS-tracked Curlews (PDF).

This is clearly an area needing much further investigation in lowland England – undoubtedly using the resources of the Wetland Bird Survey data on the BTO website.

The poster below has been posted in many observation hides at WWT and other reserves on the Severn Estuary and Bristol Channel.  Please continue to look out for Slimbridge-ringed juveniles and report them (even if you can’t read the numbers on the rings). 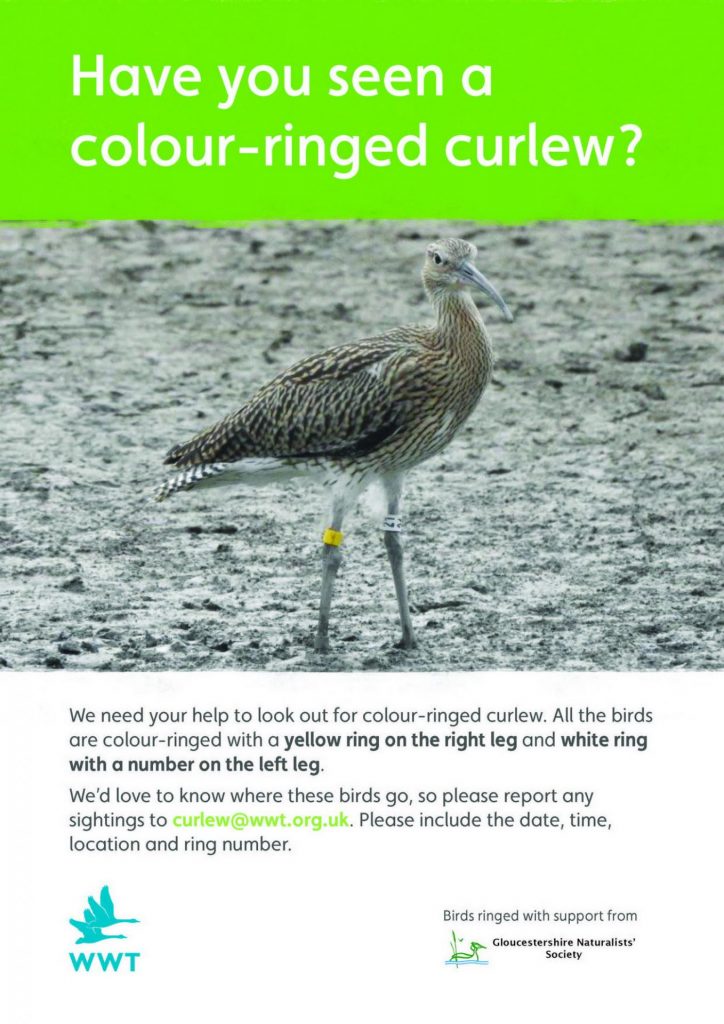 And head-started birds from Shropshire too!

A Seasonal End to the year for Curlew Country – The first sighting of one of this year’s head-started chicks has been reported.  The chick was foraging naturally on the coast in Cornwall. 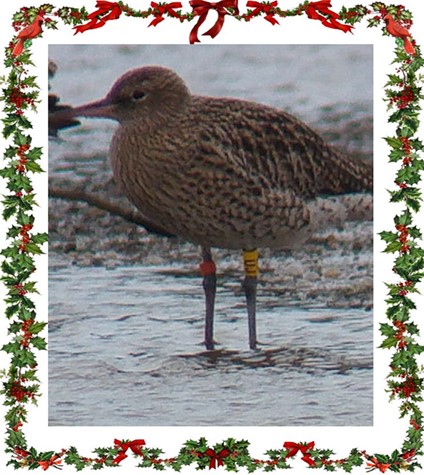